The Importance of Kyukpa: the Art of Breaking

Everyone who has ever seen a martial arts demonstration will immediately recall the board or block breaking portion.   There is no doubt that it is most impressive, but the question often arises as to whether breaking is truly important to martial arts training or whether it is merely a way of impressing spectators or ranking students for belt promotion.

To understand the importance of breaking techniques one must remember that the martial arts are first and foremost combative arts.  When one speaks of the martial arts (as opposed to martial sports) it should be remembered that every movement, exercise, and training device has as its purpose allowing the practitioner to survive and vanquish in mortal combat.  This does not mean that the martial artist seeks conflict, but rather trains to avoid it or, if necessary, successfully defend against unwanted violent or even lethal encounters.

The martial arts can be subdivided into hard arts such as Karate and Kickboxing etc., and the soft arts such as Tai Chi, or Judo.  There is also the category of arts that combine both hard and soft techniques. Hapkido for example tends to be soft on defense and hard on counter offense.  Regardless of the style, power, accuracy and focus all will come into play in the manipulation of the opponent and the execution of an attack or counter. Breaking techniques will help develop these necessary abilities.

The importance of breaking practice in the martial arts can be (excuse the pun) broken down into four main components:

First on the above list is Confidence building.  The author can relate to this because of a personal example from his own life.  In 1970 I started both my martial arts training as well as starting my first year in college at the University of Illinois.  I chose to study the martial arts after being mugged my senior year in high school. One year later I entered college as a timid young man with and overwhelmingly difficult field of academic study.  I refused to accept being a victim ever again so despite my school work load I took a little time away from my studies to practice Judo and Tae Kwon do.

At first, juggling classes was difficult and the activity level trying, but the first time I successfully broke a one-inch thick pine board with my bare hand a dramatic mental change occurred.  My thought process was simple. I reasoned that if I could so easily accomplish something so difficult to perform as board breaking, then merely studying an academic curriculum would be a breeze.  I received straight A’s in school my first year as well as getting a belt promotion.

During the almost fifty years in the martial arts I have never ceased to be thrilled by the expression of amazement and joy on a young student’s face when they realize that they had broken a think wooden board with their bare hands or feet.  Each time is like re-living my own experience. It truly does help develop a level of confidence in a person that no other single technique that I know of can. Less than four years after beginning my training my signature demonstration technique was to do a flying side kick over six kneeling adults and while in the air kick through six inches of pine board.

Without the level of confidence that the martial arts had given me I doubt I would today be a Doctor of Veterinary Medicine as well as a Hapkido master and bestselling fiction author.  Nothing is impossible if you set your mind to it.

The second aspect of martial arts breaking technique is Accuracy.

Obviously when striking or kicking an opponent the knowledge of their anatomy and physiology is important.  I once asked my instructor why he didn’t consider a blunt force power blow “proper technique?” His answer was priceless.  “A building that falls over on someone does a lot of damage, but that wouldn’t be Hapkido now would it?” In other words, a blunt force blow to the body isn’t usually as effective as a focused strike to a pressure point or an anatomical weak spot such as the throat or knee.  I ask you, would you rather receive a punch to the abdomen or a small finger spike right though the eyeball?

When striking an object, be it board, block or wooden stick the location of the strike is crucial to proper execution and to a successful break.  If you are trying to break a twelve inch by twelve-inch board it is best to strike in the center, with the hand or foot lined up along the grain of the wood. If one was to strike off center and too close to the edge, the board would probably not break, while the hand just might.

I can assure you, again from personal experience, that when trying to break something the more flexible the material is and the more it moves, the harder it will be to break.  Even a simple wooden broomstick break can lead to six weeks in a plaster hand cast if the practitioner forgets to secure the handle, so it doesn’t bend during the breaking attempt.  (Author Note: The broom handle did break, but so did my metatarsal bone.) Thus, it clearly behooves the martial artist to develop his or her accuracy by performing breaking practice, accuracy which will come in handy later when trying to strike a small body part or a specific moving pressure point.

One of the first things a student is taught during breaking exercises is the importance of Speed of Attack as well as the mount of Penetration generated by the blow.  All of this of course, as any practitioner soon realizes, is dependent on proper stance. The energy of a strike, whether with arms or legs comes from the base stance. Without a proper transfer of energy from the toes through the hips and up to the part of the body used in the strike, the target break will most likely fail.

It is important to realize that an object will not break unless the force generated penetrates through it completely. Just as a tree that bends with the wind will not break, an unsecured board that moves when punched or kicked will not break.  The strike has to have enough energy to penetrate past the object’s surface and through its material to come out the other side in order for that object to break.

Enough power can be generated to break a board or brick under normal practice circumstances, even by someone as young as eight years of age.  If however the force is not properly directed or, as we said before, if the board is not secured it will usually not break. There is however a factor that can, to a certain extent, overcome this.  That factor is the speed or intensity of penetration of the force generated. If your punch or kick is fast enough it will shatter the object in question before object’s movement becomes a factor. Try finger-spearing completely through a paper dropped from shoulder height.  It can be done, but unless you have incredible speed and accuracy it is embarrassingly difficult.

The importance of speed and penetration should be obvious to all. When in a confrontation the faster you react, the better chance you have of overcoming the opposition and of course penetration is important to overcome such things as heavy clothing, any obstacles between you and the target (such as windows etc.) and in ancient times of course, body armor.  The speed of the force generated against a precise target will increase exponentially the amount of penetration.

Finally, we must consider the concept of power and mental focus.  There are entire internal martial arts built up around the concept of manipulating internal Ki energy (or “Chi” in the Chinese arts).  Hapkido, Aikido and Tai Chi come immediately to mind. The concept is that a practitioner of the internal arts can focus his or her internal energy flow to either increase the effectiveness or power of the attack, or to disrupt or weaken the Ki energy flow of the opponent.  Pressure and dim mak points are such targets. One example of this might be how the hand becomes paralyzed after the elbow is hit just right (“hitting the funny bone”).  And simply press to the “Lung five’ pressure point or a push to the “Triple warmer ” on the arm will inflict pain and manipulate the opponent’s body. Applying powerful pressure against a specific narrow spot clearly will increase the effectiveness of the technique.

Remember however not to equate power with brute force. My twelve-year-old daughter could break a cinder block, but was clearly more feminine than muscular. Through years of martial arts training she had learned to focus her energy and speed into the exact point necessary for the break and had the confidence in her ability to do so.  Muscular brute strength had little to do with it. 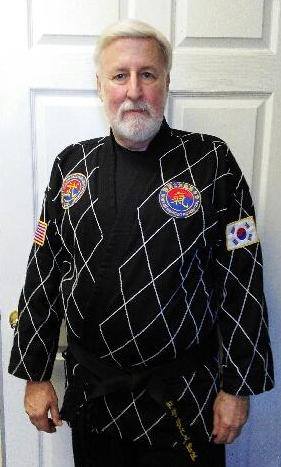 Master Stone is an instructor at American Dragon Martial Arts and is studying for his 6th dan in HaeMuKwan Hapkido until Grand Master Richard Hackworth.