Learn about self defense while toning muscle and building confidence. Find out more about our Hapkido programs here.

This program teaches women practical skills designed to enable them to protect themselves in case of an attack. Learn more here.

For long-term learners, progress through our 2-year program to earn your black belt.

Take your learning one step further and impact the lives of others by pursuing your Instructor certification.

We believe that developing and maintaining a sound body and mind are critical to getting the most out of life. In our adult programs you will experience a unique approach that benefits the body and the mind.

To strengthen your body and increase flexibility, classes begin with deep breathing, isometric and dynamic tension exercises. You will find that the breathing and concentration exercises sharpen your senses and reflexes while allowing you to relax from the stress of daily life.

Flexibility is enhanced through a gradual building process of safe and easy stretching techniques. This unique combination of using the power of the body and of the mind is the key to increased energy, self discipline, and fitness for a longer happier life. These qualities are essential in recognizing and handling self defense situations, as well asmental stress.

The physical fitness and mental benefits are applicable to all students, but adults obtain unique and special benefits from our program:

Most people think of self defense when they think of martial arts. They aren’t aware that martial arts training is an ideal way to get in shape. After they discover the overall conditioning effect, they begin to understand that martial arts offers extraordinary value and advantages that cannot be achieved from the more traditional methods of getting in shape.

We employ a complete, integrated system that will teach you the techniques you need to defend yourself intelligently in threatening situations.

As you develop your self defense skills you will be able to cope with daily problems and situations. The sense of accomplishment and pride that is developed will carry over to every aspect of your life.

The discipline, concentration and physical skills that you will gain will lead to greater self confidence and self esteem. You will have the self-assuredness to cope with the hassles and aggravations that can occur in today’s hectic, frustrating and sometimes dangerous society.

Regular exercise firms and tones muscles, burns more calories, and helps reduce your appetite. These factors will give you a trimmer, firmer, and healthier appearance. 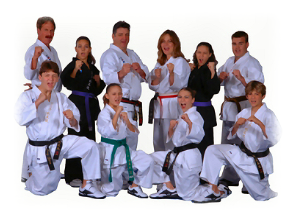 Don't just take it from us, let our students do the talking!

"In the short time that I've been attending American Dragon Martial Arts Academies my self confidence has improved dramatically.

"As a police officer, I need to have effective self-defense skills.  The instructors here are the best I've ever seen.

"I credit their program for my success at winning the gold medal at the Police Olympics!"

The President of the Korean Hapkido Federation

"I have had the opportunity to personally work with many of the instructors from the American Dragon Martial Arts Academies and proudly recommend them to anyone considering training in the martial arts."

"I had a chance to work directly with Grand Master Richard Hackworth in Clermont, Florida, during the filming of the movie, Born to Compete.

"He is one of the most knowledgeable Taekwondo and Hapkido teachers I have ever seen. Anyone taking his classes is bound to benefit immensely from it."